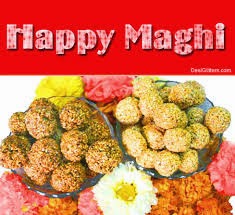 No offence but as being a tharu, I had never experienced maghi experience as known to outside world. There is a quite big difference between how it is celebrated from one place to another. As we already have known how tharu people celebrate maghi, which is also celebrated as new year, but most of us didn't know that it is all about the tharu of western region and how they celebrate it. When we head towards the eastern region of Nepal, you might be surprised about how different is the culture and tradition of same ethnic group of Nepal living in different parts of Nepal.

Here I just want to show how we are culturally rich that there is a big cultural difference between the same ethnic group of nepal. There are many difference which i will be not able to cover here so today I just want to discuss about a great festival maghi also known as 'maghe sankranti or makar sankranti' which is celebrated at 1st magh every year of nepali calender and falls in mid January of Gregorian calender . Tharu people celebrate it as a new year and Nepal government has consider it as a national festival and has declared magh 1st as a public holiday . As we might have known how tharu people celebrate it but might not knew how it is celebrated in different parts on Nepal, so today I am going to write how it is celebrated in easetern part of Nepal.


At last but not the least, this article is not intended to hurt the feeling of the any person or community but only tries to show the cultural difference between the same community residing in the different parts of Nepal.
at 11:38 PM
Email ThisBlogThis!Share to TwitterShare to Facebook
Share:
Newer Post Older Post